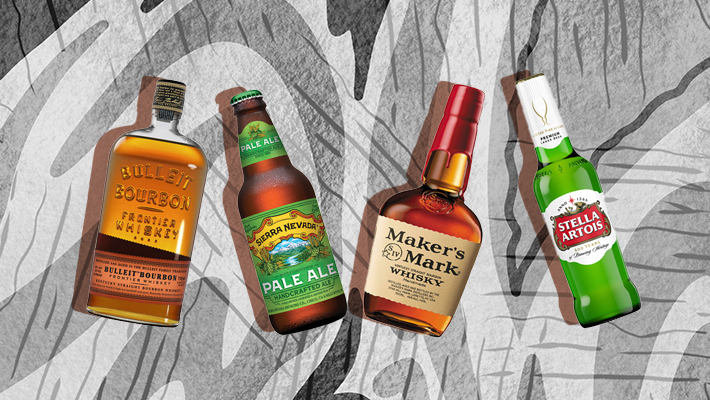 One of the best ways to enjoy bourbon is to drink it with an accompanying beer. Sometimes known as a coppersmith (usually when the whiskey is in shot form), this combo is a favorite of drinkers and bartenders alike. In theory, beer often acts as a sort of chaser for the hotter alcohol you enjoy as a main course. “A beer back” as aficionados call it.

Charles Bement, sommelier and director of beverages at B. Hospitality in Chicago, likes the bourbon-beer pairing. According to him, the choice of beer is just as important as the whiskey, as the two have to play against each other.

“I think making IPA and bourbon can be overwhelming,” says Bement. “The lager has just enough weight and citrus components to pair well with the caramel notes you get on a good Kentucky bourbon.”

To that end, we’ve commissioned a handful of well-known bartenders to pair the beers they love with bourbons to shed some light on the beer problem for all of us. They did not disappoint in their selections. Check them all, below!

At my bar, we do a bock and bourbon special with Shiner Bock and Buffalo Trace Bourbon. They are a perfect combo. Both have subtle complexities of bittersweet caramel notes that are perfect for an after-work combo.

I’m a bit of a classic on this. Give me a picture of Jim Beam and a Budweiser. I know exactly what I get every time – classic caramel, vanilla and oak bourbon flavors and crisp with a thirst-quenching beer that tastes like beer.

It might sound a bit strange, but I would personally choose a nice chilled glass full of Golden Road’s Mango Cart, which is a mild, mango-flavored wheat beer that provides a nice balance to the drier finish of my Eagle pour Rare 10 year old Bourbon. Having a nice contrast between the refreshing fruit aroma and the bold, woody flavors of the bourbon makes the tasting even better.

Trumer Pils alongside IW Harper 15 Year Old Bourbon is my favorite combination as it takes me back to an earlier time in my bartending career when I lived in the San Francisco Bay Area. Trumer Pils is a refreshing pilsner at around 4.7% ABV while the IW Harper 15 is light in alcohol for bourbon at 43% ABV. But, it offers heavy and sensational flavors on the palate with hints of oak, caramel, spice and vanilla. The distillery has been around for a long time but mainly produced for the international market until it was brought back to the domestic market in 2015.

Joshua Scheid, Beverage Manager at REX at The Royal in Philadelphia

If I go for beer and bourbon, there’s nothing like a cold PBR and a glass of Old Grand-Dad Bonded. The extra punch of bourbon bound with the sweetness of PBR’s grocery store white bread is so comforting.

My favorite right now is Neko no Sukiyoubi (Wednesday Cat White Ale) and Burning Chair by Savage & Cooke. I love the barrel notes in the Burning Chair and there are sweet tropical notes that pair perfectly with the sweet fruit and malt of the beer.

Try not to overthink this one. I go with a Makers 46 and Miller High Life. It’s an innocuous beer that can go with just about anything, paired with a nice, slightly tougher bourbon to spice it up a bit.

Guilty Pleasure – I like light beer. I’ve worked in craft bars my entire adult life. And even with endless options of spirits from faraway lands behind the bar, I always lean towards an ice-cold lager like Coors Light and a good old Woodford Reserve bourbon to sip while closing.

After a long day of work, I love settling in with a boilermaker. In my opinion, the best combination for this is Maker’s Mark and Stella Artois Lager. The sweet, woody, almost caramelized notes of the bourbon complement the almost fruity notes of the Lager.

Pairing Few Bourbon with a dark chocolate stout can help quell springtime cravings. Whiner Beer Company’s NWAR Tsokolate stout is one of my favorites to pair with FEW. Notes of chocolate, coffee and toasted coconut complement the rich caramel and spicy clove flavors of FEW Bourbon.